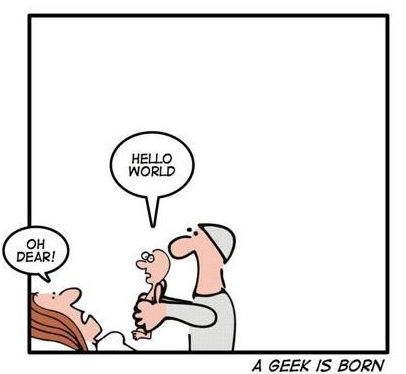 The birth of a programmer.

Our group decided to study jokes unique to Computer Science and Engineering. We decided upon this topic because one of us is a computer science major, another is an engineering major, and the last is an engineering modified with computer science major. Jokes are prime examples of folklore that not only highlight what a certain folk group finds humorous, but also shed light on the shared experiences and common knowledge of that group. If a joke must be explained to make sense, it will be longer and less memorable than a short, pithy joke; as such, the jokes that survive draw on the common knowledge of the group to make often nuanced observations that are still brief enough to be funny. This reliance on common knowledge creates a bond within a folk group because understanding a joke unique to that group fosters a sense of group identity. This point is especially true for engineering and computer science-themed jokes that are somewhat exclusive because of their reliance on insider knowledge of these fields. Furthermore, jokes are naturally spread from person to person through their telling, but are not expressly taught. Hence, people within a folk group naturally pick up on jokes in their day-to-day lives without actively trying to learn or collect them, one of the defining features of folklore.