By 1831, Aldridge was an affirmed star. He played at many towns in Ireland, Bath, and Edinburgh to great success. His fame started to wax after 1835 and he spent time lecturing on drama to get through lean times. In 1845 he revived Shakespeare’s Titus Andronicus, which the British Isles had not produced since 1724. 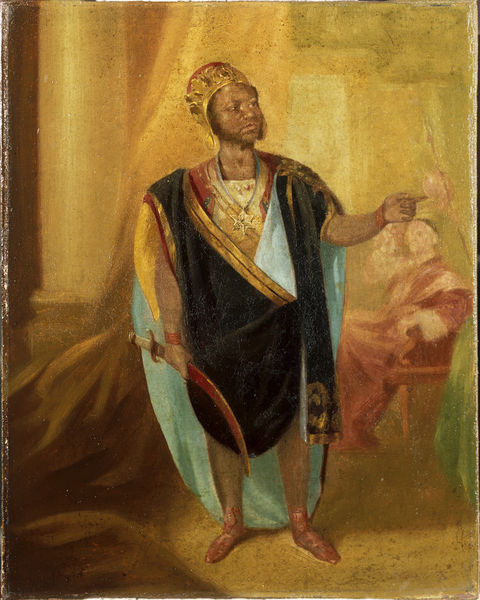 The character of Aaron the Moor was transformed by Aldridge and his collaborator Charles A. Somerset into a hero, rather than the villain of Shakespeare’s play. Alas, it was not received well and he was not invited back to the West End London theaters. Following this, Aldridge left England to travel Europe and became a truly international celebrity. In Germany he was presented to the Duchess of Saxe-Coburg-Gotha and performed for Frederick William IV of Prussia, who awarded him the Prussian Gold Medal of the First Class for Art and Science.

He performed later in Budapest. Then in 1858, he toured in Serbia and Imperial Russia, meeting Fyodor Tolstoy, Mikhail Shchepkin, and Ukrainian artist-poet Taras Shevchenko, who painted his portrait (see left). Heading back and forth between Britain and Europe, Aldridge continued to perform. Once at an appropriate age, he did what any British-in-heart, physically-ruminating, and  self-respecting actor would do and took on the role of King Lear in the eponymous play by William Shakespeare (see right).