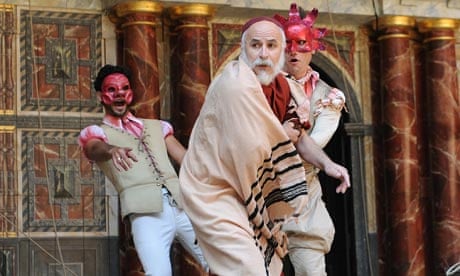 Jacob Cohen in Habima’s The Merchant of Venice. Photograph: Tristram Kenton, The Guardian.

Since the 1800s, Israel and Palestine have been embroiled in a bitter war over land, water, religion, and the fight for their own national and personal identity to be recognised. In 2012, these two countries had an additional conflict on their minds: the performance of a Shakespeare play, The Merchant of Venice, and the problematic representation of Shylock, the displaced Jew.

The play was part of the Cultural Olympiad in London, where Shakespeare’s Globe theatre staged 37 of his works in 37 different languages. Among the selection was “Love’s Labor’s Lost” in sign language, “Othello” in the language of hip-hop and “Henry VI” Parts 1, 2 and 3 in Serbian, Albanian and Macedonian, and “The Merchant of Venice” in Hebrew, by the Habima Theatre of Israel. In a region where Judaism and Zionism has come under great strain, such racial depictions in theatre had forced audience members to remember the plight of the displaced people, be it the Jews or the Palestinians.

From the Palestinian sympathisers, a pro-Palestinian group called Boycott From Within had attacked the Globe for hosting such a production. Leading theatre artists – including the Globe’s former artistic director, Mark Rylance – said that Habima’s invitation should have been withdrawn because the company has performed in illegal Israeli settlements in the occupied Palestinian territories. Yet others, including playwright Howard Jacobson, have argued that such an action would amount to censorship, which is always a tricky word to throw around in the performance world. Everyone wants to believe in freedom of expression, and personal liberty and sovereignty over performance. But when does one person’s freedom cut into someone else’s? It seems like the issue in The Merchant of Venice has recurred, time and again, and manifests both within in the play and in the production of it.

Perhaps in an effort to appease the freedoms of two parties, Rylance’s successor Dominic Dromgoole, asked for the audience to respect the performers. “You’re not watching politicians or policy-makers,” he said. “You are watching artists who are here to tell a story.”

And perhaps just as pertinently, it was also to be performed by Jews who were taking on a work that many consider to be antisemitic. I, for one, was caught between empathising with the Jewish nation that has to contront the most famous anti-Semitic drama ever written, or that it was performed in the middle of a situation in which such a nation was in aggression with another country.

Apart from the action in the play, yhe stage turned various times to the audience members several times. A middle-aged woman quietly unfurled a banner that read “Israel Apartheid Leave the Stage”. Behind her a thin man in a blue linen suit started to wave a Palestinian flag. Each of them was evicted. A grey-haired woman at the front of the balcony rising to her feet and applying a white patch to her mouth. Half an hour later and the three men and single lady were still standing. As the protesters were removed, some shouted “Free Palestine!”After the interval, a man standing in front of the stage was ejected after shouting: “Hath a Palestinian not eyes?” in a twist on Shylock’s famous speech. But apart from the protestors being escorted out, the drama off-stage never fully materialised.

Habima (which means “the stage”) gave the first Hebrew performance of “The Merchant of Venice” in 1936, 12 years before the founding of Israel, in what was then Mandate Palestine. “The Merchant of Venice” and the various portrayals of Shylock have since been the way in which Habima can express Israeli identity and Israel’s changing position in the world. In 1959, in a hopeful time in Israeli history, Shylock was portrayed as “a liberal rabbi, with a well-trimmed beard and a clever and pleasant expression,” according to one reviewer. When Israeli occupation started and territories were seized by Israeli parties in the Arab-Israeli war, the production of 1967 depicted Shylock as an allegory of Jewish oppression, and a justification for the existence of a Jewish homeland in Israel. In 1980, a Cameri Theater production in Tel Aviv left out Shylock’s forced conversion to Christianity as they felt it would upset an increasingly religious Israel.

Whether or not you support the play; to allow Habima to perform it and give therapeutic empowerment to the Jews who perform them, or to ban them for Palestinian sensitivities, one thing is certain – it seems the longstanding evidence is that freedom of expression will be boldly asserted. As Shylock had replied, “I am not bound to please thee with my answer.”